“With the acquisition of the Manson Bay claims and the previous option of the Manson Bay South property from Eagle Plains, SKRR now holds an exceptional, contiguous land position that hosts a historic drill outlined high-grade gold zone including an intersection of 10.03m @ 15.39 g/t Au, and numerous high grade gold and base metal showings along the prolific Schott’s Lake anticline.  SKRR is eager to put its exploration expertise to work to advance this top-ranked property, located only 40km to the northwest of the historically significant Flin Flon mining camp”.

Highlights from drilling include:

The mineral occurrence located on the Manson Bay Property referred to as the Manson Bay Gold Zone is documented in the Saskatchewan Mineral Deposit Index (“SMDI”) as occurrence #2280.  Staking and exploration on the Manson Bay and Manson Bay South properties dates back to 1953.  Kay Lake Mines Ltd. acquired the property in 1955 and conducted an electromagnetic survey in 1955, and in 1956 followed up with a diamond drill program to test the anomalies along the northeast shore of Manson Bay. Hudson Bay Exploration optioned the property in 1983 and completed 3 drill holes. Drill holes MBO-1 and 2 intersected the mineralization described by this showing.  Discovery drill hole MBO-1 encountered an 0.8 ft intersection that returned 0.04 oz./ton Au, 4.38 oz./ton Ag, 5.81% Cu and 0.60% Zn. Between 1987 and 1988, Mingold Resources Limited completed a further 43 drill holes (MBO-4 to MBO-46) to outline a gold-copper rich zone of mineralization.  Mingold estimated reserves for this ore shoot of 660,000 tons grading 0.10 oz/ton (3.4 g/t) Au* to a depth of 400 feet (down dip) at the end of this drill program.

Geologically, the area straddles the transition zone between the highly metamorphosed (upper amphibolite facies) Amisk Group interlayered volcanics and metasediments to the south and the Kisseynew gneiss belt derived wackes (garnetiferous quartz-feldspar-biotite-hornblende gneiss, quartz-feldspar- hornblende-garnet± biotite gneiss, biotite migmatite, and sericitic quartz- feldspar-biotite schist) to the north and to the east. Pegmatite and calc-silicate gneiss are found in almost all drill holes.

Structurally, the showing area occupies the core of the Schotts Lake anticline. The host rocks have a northeast strike and dip 20°to 30°SE. Lineations indicate a plunge of 21° to 40°NE.

The above results were summarized from the SMDI descriptions and assessment reports filed with the Saskatchewan government.  SKRR cautions that historical results were collected and reported by past operators and have not been verified nor confirmed by a Qualified Person but form a basis for ongoing work in the Manson Lake and Manson Lake South property area. Further work (including drilling) is required by SKRR in order to verify the historical work on the Manson Bay Property. Management cautions that past results or discoveries on proximate land are not necessarily indicative of the results that may be achieved on the subject properties.

The common shares issued pursuant to the acquisition of the Manson Bay Property are subject to a four month hold period from the closing date in accordance with applicable securities laws and the policies of the TSX Venture Exchange.

In respect of the requirements of MI 61-101 and Exchange Policy 5.9, SKRR relied on the exemptions from the formal valuation and minority approval required under MI 61-101. SKRR was exempt from the formal valuation requirement of MI 61-101 in reliance of sections 5.5(b) as no securities of the Company are listed on the specified markets outlined therein. Additionally, the Company was exempt from minority shareholder approval of MI 61-101 in reliance of section 5.7(1)(a) (fair market value not more than 25% of the Company’s market capitalization).

The scientific and technical information contained in this news release has been reviewed and approved by Ross McElroy P.Geo, a director of the Company and a “Qualified Person” as defined in NI 43-101. Mr. McElroy verified the data disclosed (unless indicated otherwise) which includes a review of the analytical and test data underlying the information and opinions contained therein.

SKRR is a Canadian-based precious metal explorer with properties in Saskatchewan – one of the world’s highest ranked mining jurisdictions. The primary exploration focus is on the Trans-Hudson Corridor in Saskatchewan in search of world class precious metal deposits.  The Trans-Hudson Orogen – although extremely well known in geological terms has been significantly under-explored in Saskatchewan.  SKRR is committed to all stakeholders including shareholders, all its partners and the environment in which it operates.

ON BEHALF OF THE BOARD

This news release contains “forward‐looking information or statements” within the meaning of applicable securities laws, which may include, without limitation, statements relating to the technical, financial and business prospects of the Company, its projects and other matters. All statements in this news release, other than statements of historical facts, that address events or developments that the Company expects to occur, are forward-looking statements. Although the Company believes the expectations expressed in such forward-looking statements are based on reasonable assumptions, such statements are not guarantees of future performance and actual results may differ materially from those in the forward-looking statements. Such statements and information are based on numerous assumptions regarding present and future business strategies and the environment in which the Company will operate in the future, including the price of metals, the ability to achieve its goals, that general business and economic conditions will not change in a material adverse manner, that financing will be available if and when needed and on reasonable terms. Such forward-looking information reflects the Company’s views with respect to future events and is subject to risks, uncertainties and assumptions, including those filed under the Company’s profile on SEDAR at www.sedar.com. Factors that could cause actual results to differ materially from those in forward looking statements include, but are not limited to, continued availability of capital and financing and general economic, market or business conditions, adverse weather conditions, equipment failures, failure to maintain all necessary government permits, approvals and authorizations, decrease in the price of gold and other metals, the impact of Covid-19 or other viruses and diseases on the Company’s ability to operate, failure to maintain community acceptance (including First Nations), increase in costs, litigation, and failure of counterparties to perform their contractual obligations. The Company does not undertake to update forward‐looking statements or forward‐looking information, except as required by law.

The technical information in this website has been prepared in accordance with the Canadian regulatory requirements set out in National Instrument 43- 101 and reviewed on behalf of the company by Ross McElroy, P.Geol. Director and Chairman of the Board for SKRR Exploration Inc., a Qualified Person.

By providing your e-mail address you are consenting to receive press releases and other information concerning SKRR Exploration and its affiliates and partners. You may withdraw your consent at anytime. 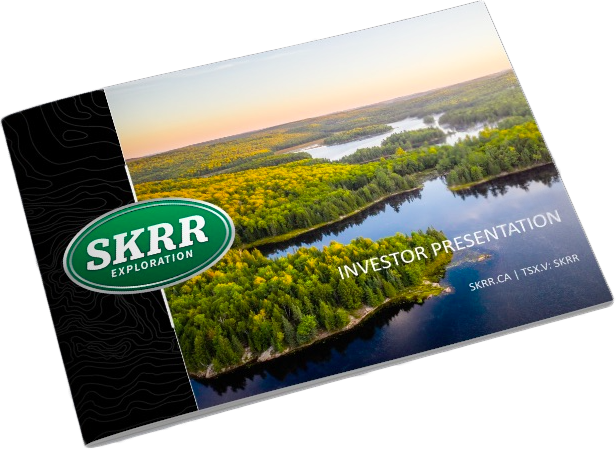